Some of my favorite puzzles, and, yes, the answers.

The Goats and the Corvette

On a game show similar to Let’s Make a Deal, a contestant is shown three closed doors and told that behind one of them is a Corvette, and behind the other two are goats.  They are asked to choose a door. The door remains closed for the moment. Next, the game show host, according to the rules, has to open one of the remaining two doors, which he does, revealing a goat. (He’s never going to reveal the car.) The host now gives the contestant a chance to change their choice before finally opening the door and winning whatever is behind it.

The question:  should the contestant (a) stay with their first choice, (b) choose a different door, or (c) it doesn’t matter either way?  The answer may surprise or even offend you.

Offend?  Yes; this became a controversial brainteaser when Marilyn Mach vos Savant gave it in her column, and defended her answer.  Many people disagreed very deeply and seriously with her, and denounced her (she is the smartest living person in the world, at least from a measured I.Q. standpoint).  But she was right.  With the answer and explanation, I’ve provided a computer program that simulates the game show and allows you to empirically judge the result, if you don’t follow (or believe) my explanation.

In the article I linked to above, there is a bit near the end where Monty Hall, the original emcee for the actual show Let’s Make a Deal, demonstrates that on that show, the rules were a little different, resulting in different outcomes, depending on the caprice of the emcee. Hence this problem is “similar to” Let’s Make a Deal.

Hey, Deep Blue, Stick This In Your Pipe and Smoke It

Look at the board below.  You’re white, and it’s your move.  Do you feel an impulse to chuckle nervously and knock your king over?  Resist it!  White to move and win.

After you’ve solved the puzzle (or have read the answer), set up your favorite chess-playing computer with the problem.  Let it see if it can find the mate. 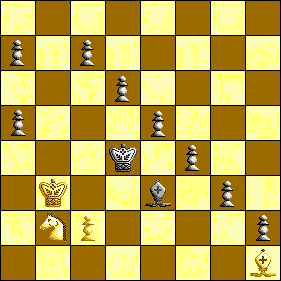 I found this puzzle on page 322 of the book Mazes for the Mind, by Clifford D. Pickover.  The chess piece icons come from the resource fork of a Macintosh Internet chess client called Fixation, used for playing in the Internet Chess Club.

This one is from “The Chess Calendar” by Workman Publishing.  About this game, they say:

Willhelm Steinitz christened the encounter Anderssen-Dufresne (a casual game played in Berlin 1852) “The Evergreen Game” for its brilliance.  White to move—mate in four moves.

Can you find the four-move mate?

The complete Evergreen Game, as well as another of Anderssen’s, “The Immortal Game”, are reproduced in an interactive display at Mark Lowery’s Exciting World of Chess. 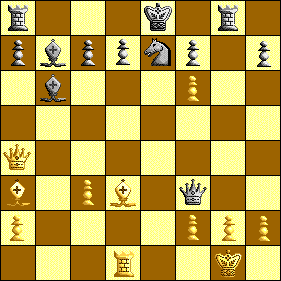 Three traveling businessmen are looking for lodging for the night.  The hotel they find has only one vacant room.  The proprietor charges them $30.  Each businessman gives him $10, and the three go up to their room.

Later, the proprietor realizes that he’s overcharged the men—the price for that room should only have been $25.  He gives the bellboy $5 and tells him to reimburse the three men.

The bellboy doesn’t feel like splitting $5 three ways, so he quietly pockets $2 and gives $1 to each businessman.